Biden Impeachment? Trump Is Calling Republicans to Ask About It – Rolling Stone


Donald Trump is calling his top allies in Congress to push for details on their plans for impeaching President Joe Biden and top administration officials, two sources with knowledge of the conversations tell Rolling Stone.

Specifically, Trump in recent months has repeatedly asked “how many” times Republicans plan to impeach the president if they take control of the House, the sources said. He has also, the sources said, asked about what they would do to impeach certain high-ranking Biden administration officials. Trump’s questions have touched on potential timelines for any potential impeachment inquiries, as well as on how much support impeachment has in the Republican conference.

The former president’s question of “how many” times Republicans aim to impeach Biden may be connected to Trump’s own dubious record: He is the only American president to have been impeached twice, once for attempting to leverage military aid to Ukraine to push the country’s officials to investigate Hunter Biden and a second time for instigating the riot at the U.S. Capitol on Jan. 6, 2021.

Trump’s ongoing discussions with Capitol Hill allies reveal his ongoing influence over the GOP caucus, as well as the power he’ll wield if Republicans win enough seats in Tuesday’s midterm elections to take over the House. But his interest in impeachment sets up a potential point of tension between him and GOP leadership in Congress, as top Republican lawmakers have reservations about the political wisdom of attempting to put Biden on trial. 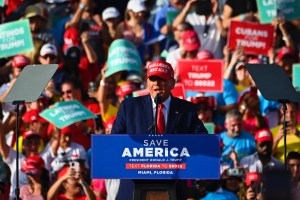 Kevin McCarthy, the frontrunner for House Speaker if Republicans retake the House, has privately said that a serious Biden impeachment process would likely be poor politics for the GOP, according to two people familiar with the matter. McCarthy, the people say, has noted that impeaching Biden risks boosting his approval rating. In an October interview with Punchbowl News, McCarthy downplayed the possibility of impeachment but didn’t rule it out.

“When we took the majority, the Clinton impeachment sapped out a lot of momentum that could have gone towards crafting policy instead,” says former congressman Jack Kingston, who has also advised Trump and acted as a surrogate during his presidency. “I don’t think working to impeach a president who is going to be a lame duck this time next week would be a good expenditure of [Republicans’] time.”

Trump himself has inquired about potential political pitfalls of impeachment in his conversations with lawmakers. “The [former] president definitely said Biden deserves it, but he also asked if it would even ‘work’ and if impeachment would be good for [Biden’s] polls,” says one of the sources, recalling a conversation that occurred in the past three months.

Spokespeople for Trump and McCarthy did not respond to requests for comment.

Other MAGA lawmakers, however, have said that impeaching Biden and his administration is critical for the party if it takes control of the House.

Rep. Marjorie Taylor Greene (R-Ga.) this week vowed Republicans would impeach Biden and administration officials. “This will happen,” she wrote on Twitter, linking to an article about Biden’s impeachment. “Any GOP Member growing weak on this will sorely disappoint our country.”

In September, Rep. Matt Gaetz (R-Fla.) told Steve Bannon that Republicans should prioritize investigations and impeachment if they take the House. “If we don’t engage in impeachment inquiries to get the documents and the testimony and the information we need, then I believe that our voters will feel betrayed and that likely, that could be the biggest win the Democrats could hope for in 2024, when it really matters to investigate them and to hold them accountable,” Gaetz said. (Asked whether Trump had discussed impeachment with him, Gaetz replied via a spokesperson: “Rep. Gaetz doesn’t discuss his conversations with President Trump with Rolling Stone.”)

Regardless of how top Republicans feel, the party’s voters are keen on impeachment. A University of Massachusetts Amherst poll this string found that more than two-thirds of Republican voters believe their party should use control of the House to impeach Biden. And with a hungry voter base and an upcoming open presidential primary, it’s likely some potential rivals to Trump for the nomination will take up the call.

Sen. Ted Cruz (R-Texas) in January suggested Biden could be impeached, arguing Democrats has “weaponized” the process against Trump and that the GOP could return the favor. On his podcast, Cruz said Biden had potentially committed impeachable offenses, including with his policies on the U.S.-Mexico border, the Texas Tribune reported. “That is probably the strongest grounds right now for impeachment,” Cruz said, “but there may be others.”

“You’re so funny. I bet you have an awesome social security number.” Saturday...

“What happened was, we reached the moon. But lost in space, I think we got there all...