When a celebrity nail collaboration launches, you can bet I’m first in line to get the details. But when I heard that Chaun Legend had a collaboration with Lottie London in the works, I jumped at the chance for an interview as fast as humanly possible. Legend has created manicure masterpieces for a laundry list of celebrities, including the Kardashians (who were his first high-profile celeb clients — impressive, right?), Rihanna, Cardi B, Zendaya, and so many more.

“Never in a million years would I ever think that I would have a collaboration or a collection of my own,” Legend admits. “I just never thought it was a possibility. That’s why I’m super excited about the Lottie London collaboration, and it’s going to be in Walmart. It’s so exciting.”

Originally from Philadelphia, Legend moved to Kentucky to begin a career in nails with the encouragement of his sister. Whilst Legend had a background in art, he’d never previously done nails. But it wasn’t long before “I was known as the guy that did nail art; that’s how I built my reputation in Kentucky.” After dominating Kentucky, Legend moved to Los Angeles to pursue his nail art career, but it wasn’t without its challenges. Like many artists in LA, success wasn’t handed to him. Legend worked incredibly hard perfecting his craft before landing his first celebrity client. He quickly built up a rapport with these clients whilst utilising social media, catapulting him into the role of one of the most sought-after celebrity manicurists.

We spoke to Legend about his new collaboration with Lottie London, his top press-on tips, and his ultimate TikTok inspiration.

Legend’s Lottie London collaboration consists of four press-on nail designs all in his signature long coffin shape. Each design is inspired by his now home and love of Los Angeles. The first is the French Twist set: “It’s my most requested, most re-created, and the most popular nail design I’ve ever done,” Legend tells POPSUGAR. “So I figured that it had to go into the collection.” Next up is the Sunset Strip set, which combines different orange ombré shades, reminding Legend of LA’s sunset strip. The third design is the art deco Emerald City set, which Legend says is one of his favourites: “I started doing my very first nail art by painting lines patterns; abstract lines that are very clean, and simple was my thing.” Lastly is the Baby Girl graffiti set: “I love graffiti street art; I just love it,” Legend says. “Every time a client asks me to freestyle something, they’re going to get graffiti.” 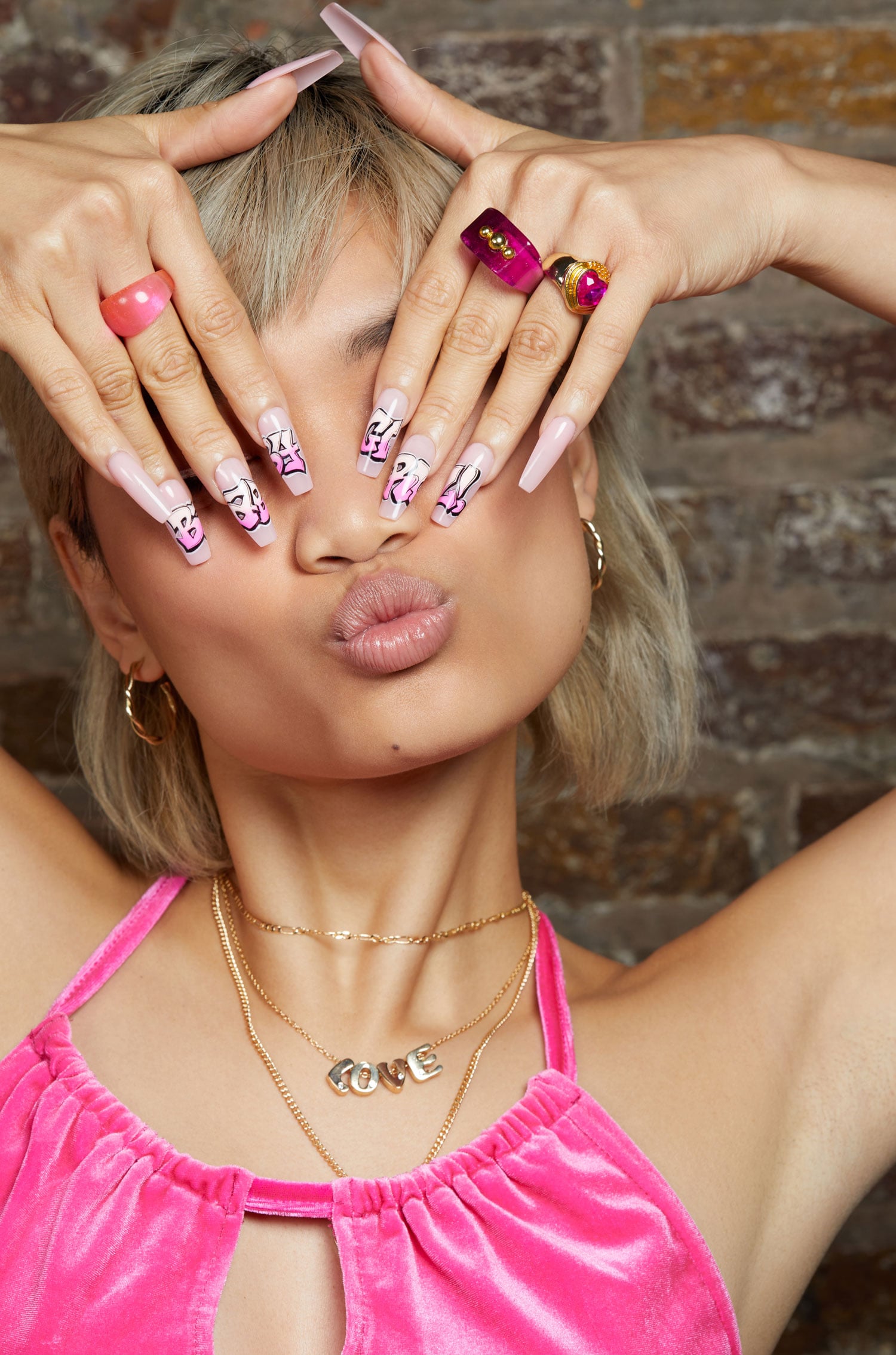 “In my opinion, press-ons feel like a much easier application process,” he says. “You just stick or glue them on and go.” Legend explains that stickers and decals are great but much more of a process requiring a top coat to seal them. With press-ons you can just “stick them on and you’re done.”

“First thing, just make sure that you properly dehydrate your nails, clean off your nails with alcohol [an acetone remover works great], and then push your cuticles back. You don’t want to just slap the press-ons right on the cuticle because it’ll lift easier,” he says. “My next tip is to be gentle with your nails. Don’t use them as tools to dig in stuff and poke things, jam things.” Repeat after me: jewels not tools.

When asking Legend what his most requested design is, he was quick to reply: “Oh my god, it’s the french tip”. I had a feeling he was going to say that. “Everybody loves the french tip. And I mean, I can never get sick of doing it either. I just always find new ways to give it a little twist. French tips will probably be the most requested design and nail art style that I always get asked to do.”

“I’m on it for hours,” Legend replies when discussing TikTok nail trends. Particularly noting his fascination for @ilysmnails, “she is very, very entertaining with nails,” he says. “I don’t know if she’s a nail tech or not, but the things she comes up with, it just wows me every single time. Sometimes it’s beautiful, sometimes it could be like, ‘what on earth?’ Because she will encapsulate all different things,” he explains. “I just find it so creative and very entertaining, I’m just on her page for hours like ‘Dang, what can this girl think of next?'” 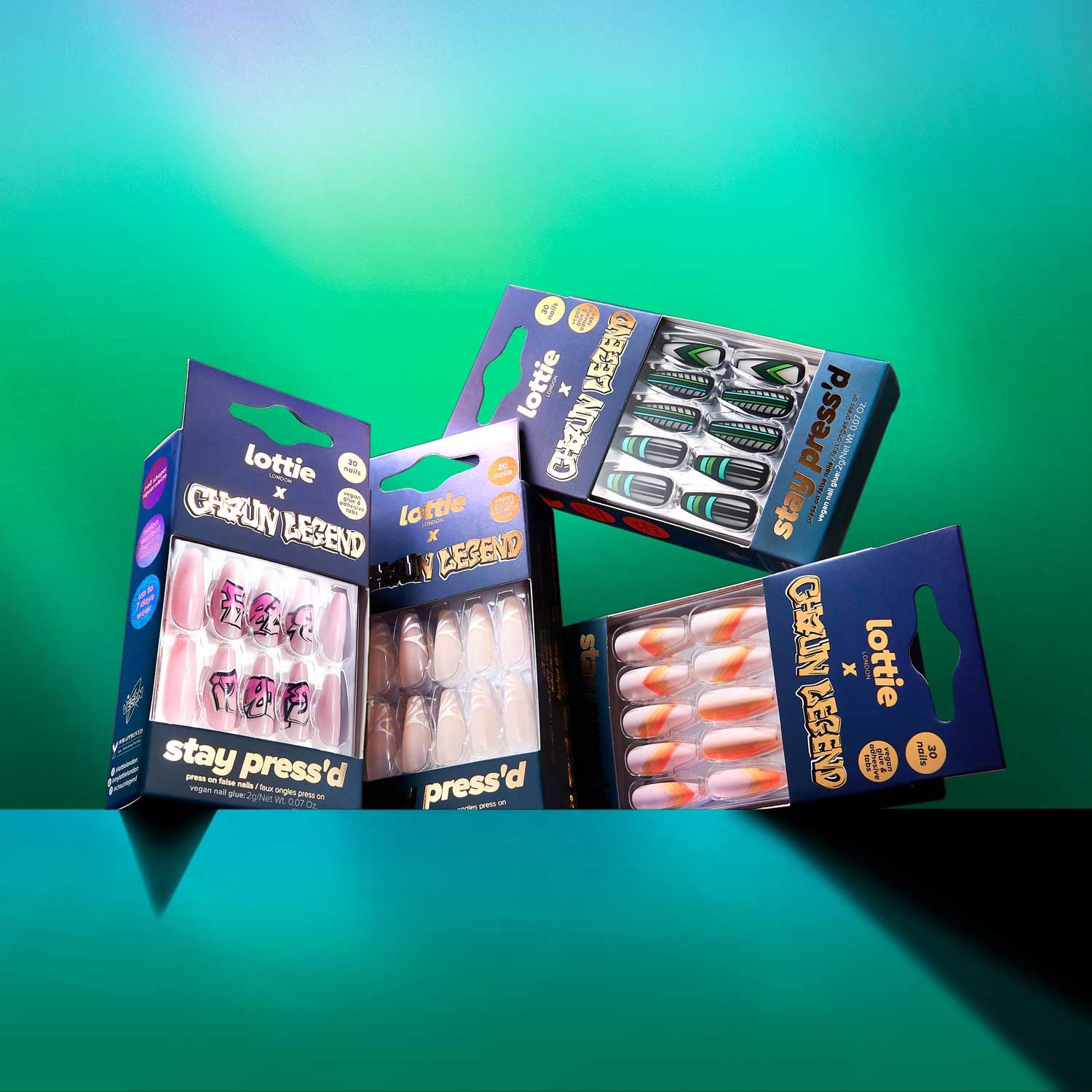 The Pandemic’s Impact On Nails

“The pandemic definitely opened people’s eyes up to different things that they can try on their nails,” Legend says. “I mean, we were stuck at home watching all these TV shows and movies thinking, ‘OK, we’ve seen everything on Netflix, what else can we do?’ Start experimenting with your nails, of course.” He also observed that people started noticing their nails grew out longer, which also caused a desire to try and experiment with at-home nail art.

Designs That Are Going to Be Huge This Summer

“Two colours that I’ve been loving are magenta and the Bottega green that’s been everywhere. I just love pops of colour. I think those two colours might be the next big thing,” he says. “Also prints and patterns. I’ve been wanting to try houndstooth; I’m going to start playing around with that print.”

Rihanna’s Most Daring Maternity Outfits During Her Pregnancy

Crop tops, sheer dresses, cutout jumpsuits — no article of clothing was off limits for...

Anne Hathaway made a dazzling entrance at the Cannes Film Festival on May 19 while promoting...