If you purchase an independently reviewed product or service through a link on our website, Rolling Stone may receive an affiliate commission.

Duke Spirits is leaning into its roots in the entertainment world with The Masters Music Series, a live performance video series that unites an accomplished group of musicians and writers. The twice weekly videos began airing on the Duke Spirits YouTube channel in October with a performance from country artist Eric Paslay singing his hit “Friday Night” and former American Idol star Paul McDonald performing his song “New Lovers.”

The series also features performances by the legendary Wynonna Judd and country trio Runaway June—a band that includes singer Jennifer Wayne who is not only the host of the series, but also the granddaughter of its namesake, Hollywood icon John Wayne.

“It’s such an honor to host The Masters Music Series,” Jennifer Wayne tells Rolling Stone. “I am so blown away by every artist that participated. They each embody the talent and persistence that my grandfather was the epitome of.”

For the music-focused program, executive producer and Duke Spirits Founder Chris Radomski and producer Austin Moody envisioned a sound that embodies the soul and pride of America, the same spirit personified by the legendary Duke himself. The creative concept came to life inside the famous Studio A at the iconic Sound Emporium Studios in Nashville where stars including Trisha Yearwood, Yo-Yo Ma, Taylor Swift and Johnny Cash have recorded albums. 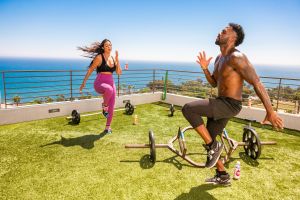 “I am extremely proud and honored to work with such a talented and giving group of artists,” Radomski says. “We share common values and passions which are the foundation of America and represented by the soul of Duke Spirits. We hope The Masters Music Series will showcase great performances and provide a platform to support emerging artists.”

The timeless music included in The Masters Series is perfectly paired with Duke Spirits’ ethos. An American artisan distiller crafting award winning ultra-premium bourbon, rye and tequila, Duke Spirits is committed to preserving the legacy of John Wayne and all he stood for. That includes his passion for film, family, and fine spirits.

In fact, it was widely known that Wayne sought out the greatest American whiskeys, the finest scotch, the smoothest tequilas, and wines of true merit from the most prestigious regions.

Ethan Wayne, John Wayne’s son, is said to have discovered his father’s memoirs, liquor collection and special blends sealed away since 1979, and the treasure trove inspired him to found the brand. Wayne was often quoted as saying that if he was going to have a drink, “it had better be a good one,” and thanks to world class vintners, master distillers, and years of research, Duke Spirits promises exactly that.

Now they’re blending that passion for entertainment and fine liquor in a new way with The Masters Series and hand-selecting artists that fit the soul of the brand.

“My goal for The Masters Music Series was to create a sound which The Duke himself would approve of,” Moody says. “As a man who valued quality and character, we had to make sure this sounded like we were making a record. To back each artist, I handpicked musicians who have a ‘thing,’ something that no one can truly recreate but those players themselves. It’s not only the playing you have to think about, it’s the attitude—it’s the grit.”