Big Joanie send up conmen in their new single, “Confident Man.” Among sparse guitar and fuzzy synths, frontwoman Stephanie Philips sings about what it takes to “matter” and how “I could be a confident man.” The song’s video, made by Rachel Amy Winton, combines family photos from Big Joanie’s members, archival footage of the Caribbean in the 1950s, and performance footage with colorful animations. The song will appear on the trio’s upcoming album, Back Home, out Nov. 4.

“The song was inspired by Jia Tolentino’s book, Trick Mirror, and an essay in it about scam culture and how everyone’s obsessed with conmen and their stories,” Philips said in a statement. “As the impact of capitalist culture becomes harder to avoid, it feels like many people would rather give in and admire those who work within the system and become the epitome of privileged, confident, white male arrogance. When you’re in that mindset, no one considers rebelling against that and tearing down everything the confident white male represents.”

“After hearing from the band about the themes that led them to create this track, I became interested in the idea of positive representations of masculinity, both young and old,” Winton said. “Trawling through a bunch of archival footage, including old home videos and photos from the Fifties ’til the present, I enjoyed catching little glimpses of sincerity, playfulness, and kindness that showed men and boys engaging in a non-arrogant form of manliness. I like the way this stands in contrast to the conmen and scam culture that the song so powerfully tears down. 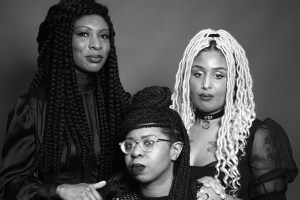 “I was also interested in the themes that sit across the band’s new album: a homeland, feelings of nostalgia, family, and the weaving together of cultures,” she continued. “When the band sent over some visual references, included in the mix was the quilt-work of American textile artist Rosie Lee Tomkins. This inspired me to make the craft-like animation style and patchwork/mural piece that the video draws symbols and motifs from (it can be seen in full at the end). The flowers, fruit, and foliage of a different place stood out to me as well the capacity for animation to really highlight the changing rhythms and tempo on this synth-heavy track.”

The group recently released the Back Home track, “Into My Arms,” with a video that celebrates queer love. The band also previously released the song “Happier Still,” which will also appear on the album. When the group announced the album, Philips explained that the title, Back Home, had a loose definition of “home.” “It’s about the different ideas of home,” she said. “Whether that’s here in the U.K., back in Africa or the Caribbean, or a place that doesn’t really exist; it’s neither here nor there.”

How ‘Munch’ Became the Song of the Summer – Rolling Stone

“I was just like, how can I describe a desperate man that wants to eat it all the...

Kid Cudi, Don Omar, and 15 Other Songs You Need to Know This Week – Rolling Stone

We’re reinventing our Songs You Need to Know franchise as a weekly playlist of the best...

How Coolio Took the Nineties on a Fantastic Voyage – Rolling Stone

Goodbye to the late great Coolio, one of the Nineties’ top hitmakers, and one of the...

Comedian’s performance with the Foo Fighters was part of tribute concert for their...