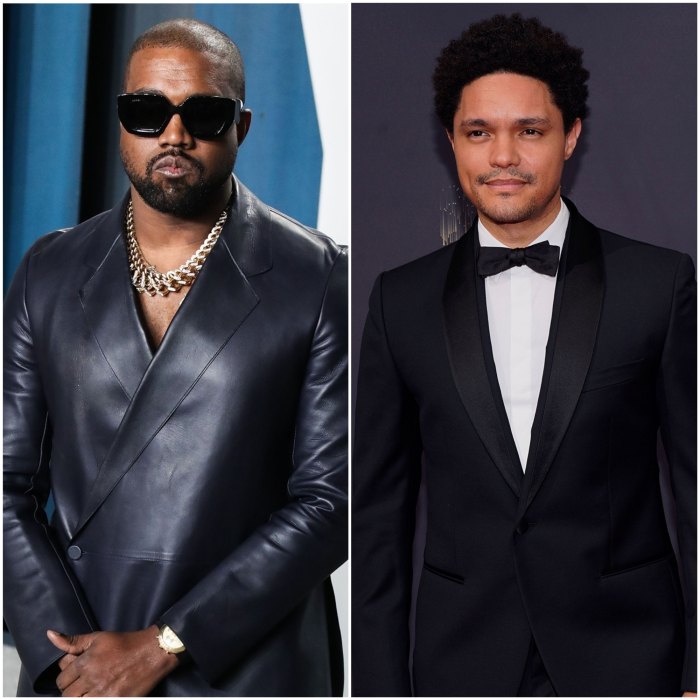 UPDATE: Sunday, March 20, 8 p.m. ET — Trevor Noah indicated that he didn’t support the Grammys banning West from performing at the upcoming ceremony. “I said counsel Kanye not cancel Kanye,” he shared via Twitter on Sunday.

Kanye West will not perform at the 2022 Grammy Awards. The Recording Academy has banned the rapper from taking the stage for a song, a source confirms to Us Weekly.

The insider says the decision to ban the 44-year-old from the Grammys was based off of his recent Instagram activity, which included slinging racial slurs at Trevor Noah. The Blast was first to report the news. Us has reached out to both West’s representatives and the Recording Academy for comment.

The 64th annual Grammy Awards were set for January 31, but the ceremony was delayed amid the COVID-19 pandemic. They were rescheduled for Sunday, April 3 at the MGM Grand Garden Arena in Las Vegas. Noah, 38, will return as host for the second year in a row.

The Daily Show host and West have had some tense exchanges recently. The “Power” rapper has taken to social media to air his grievances with estrange wife Kim Kardashian amid their divorce, which she filed for in February 2021 after nearly seven years of marriage. He has claimed that he doesn’t get a fair say in his children’s lives, slammed the KKW Beauty founder, 41, for allowing their daughter North, 8, on TikTok and claimed his children — North, Saint, 6, Chicago, 4, and Psalm, 2 — were being kept away from him.

Additionally, he has launched several attacks on Pete Davidson, Kardashian’s new boyfriend. West has included disses in songs, said he would never let the SNL performer meet his children and killed a Claymation effigy of Davidson in the music video for “Eazy.”

Noah led a nearly 10-minute segment on West’s treatment of Kardashian in the Tuesday, March 15, episode of The Daily Show. The South Africa native explained that this isn’t just entertaining drama but a reminder to look for the warning signs of an abusive relationship.

“It touches on something that is more sensitive and more serious than people would like to admit. I know everyone thinks it’s a big marketing stunt,” Noah said on the Comedy Central show. “Two things can be true: Kim likes publicity. Kim is also being harassed. Those things can be happening at the same time. ‘Cause I’ll be honest with you, what I see from this situation — I see a woman who wants to live her life without being harassed by an ex-boyfriend or an ex-husband or an ex-anything.”

The comic continued, “What she’s going through is terrifying to watch, and it shines a spotlight on what so many women go through when they choose to leave.”

Noah recalled growing up with an abusive stepfather who eventually shot his mother in the head, which she miraculously survived. The host stated he wasn’t implying that West was capable of doing the same, but he remembers how people ignored his mother’s abuse claims. He’d rather look silly for shining a light on it than ignore what he sees as signs of abuse.

“The point is that Kim Kardashian and countless other women, they find themselves in a terrible position, you know? Because asking Kanye to stop clearly isn’t helping,” the Born a Crime author said.

He continued, adding, “What we’re seeing though is one of the most powerful, richest women in the world, unable to get her ex to stop texting her, to stop chasing after her, to stop harassing her. Just think about that for a moment. Think about how powerful Kim Kardashian is, and she can’t get that to happen. … If she cannot escape this, then what chance do normal women have?”

The “Donda” performer was not happy with the segment. West shared a screenshot of an Internet search for Noah on Wednesday, March 16, via Instagram with caption that used a racial slur several times.

West’s words got him banned from Instagram for 24 hours. Prior to his account being pulled, Noah reportedly responded in the comments section.

“There are few artists who have had more of an impact on me than you Ye. You took samples and turned them into symphonies,” the lengthy comment read, in part, via TheWrap. “You’re an indelible part of my life Ye. Which is why it breaks my heart to see you like this. I don’t care if you support Trump and I don’t care if you roast Pete. I do however care when I see you on a path that’s dangerously close to peril and pain.”

He also addressed West’s use of the slur, adding, “Don’t ever forget, the biggest trick racists ever played on black people was teaching us to strip each other of our blackness whenever we disagree. Tricking us into dividing ourselves up into splinters so that we would never unite into a powerful rod. ✊🏽.”