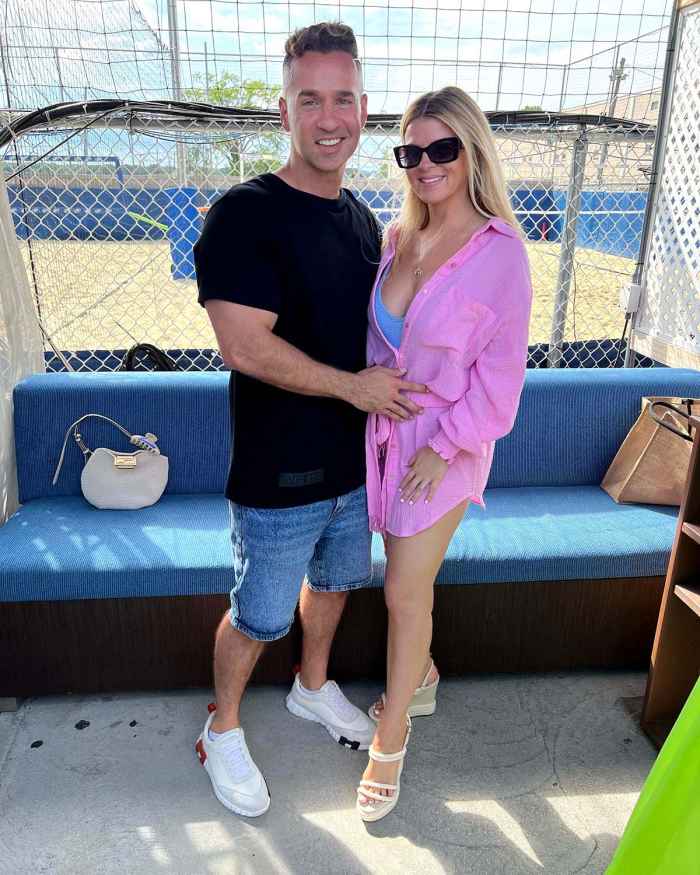 A magical moment. Mike “The Situation” Sorrentino is revealing the emotional story behind how he found out his wife Lauren Sorrentino was expecting baby No. 2.

“We were going through a tough time because our beloved family dog Moses had just passed,” the Jersey Shore alum, 40, exclusively shared with Us Weekly on Tuesday, August 9. “We were definitely a little upset and the next thing you know, [Lauren] came down the stairs with a ‘big bro’ T-shirt on [our son] Romeo and I pretty much really just burst in tears because it was such a magical moment and such a happy moment for our family.”

The MTV personality added: “We kind of felt that it was like a parting gift from Moses … so it was an amazing moment.”

The Jersey Shore: Family Vacation star and Lauren, 37, shared their news with the world in July. “We have an amazing announcement!! We’re a growing family! Baby on the way 🤰🏼 January 2023,” the couple wrote via identical Instagram posts at the time. “God is Good 🙏🏼.”

The proud parents also posted the announcement to their two-year-old son Romeo’s account, with the little one sporting his “big bro” shirt in style. “Big brother Romeo reporting for duty,” the caption read. “Baby coming January 2023 🙏🏼.”

The New York native and his love, who met as college sweethearts and wed in November 2018, welcomed Romeo in May 2021 after previously suffering a pregnancy loss in 2019. Though they were excited to have a successful birth with their first child, the infant contracted a fever that landed him in the NICU for two weeks, causing the parents unimaginable stress. The harrowing event was documented on Jersey Shore: Family Vacation earlier this year.

While the pair have endured stressful experiences with past pregnancies, they were still open to bringing another child into the mix.

“We were definitely trying, but at the same time … we weren’t forcing it,” Mike told Us. “I was nervous because … you have baby number one and you don’t know what’s gonna happen when you have baby number two. Am I gonna be able to handle it? Is any of my performance gonna suffer as a dad, you know? You sort of worry a little bit. And I did worry when the first one was coming too, so it just shows how much I care.”

Even if the duo wasn’t “forcing” a second pregnancy, they were being mindful about having their children be “close in age.”

“Our magic number was around three [years apart.],” the reality star revealed. “As Romeo was getting close to one years old and we were like, ‘Listen, we kind of wanna stay in the baby stage and we want the babies to be … in the same schools and such. So, it really just happened the way we wanted. I guess we kind of manifested it.”

As for how they envision their expanding brood, the Celebrity Big Brother alum shared how he and Lauren may consider having a third child, depending on the sex of baby No. 2.

“If it’s two boys, that’s adorable, and if it’s a boy and a girl, it sort of evens out the squad,” Mike stated. “If we have two boys then we will obviously go for the girl and I think that if we have a girl then we’ll probably reevaluate the whole situation and go from there.”

With reporting by Christina Garibaldi