MIKE Tindall has landed in Australia ready to become the first Royal to ever take part in I’m A Celebrity… Get Me Out Of Here!

The former England rugby ace, 43, arrived at Brisbane airport on a red eye flight from London, and said he’d miss his royal family while in camp.

Mike is married to the late Queen’s granddaughter Zara Phillips, making him the long-running show’s biggest ever signing.

Wearing a baseball cap and sunglasses, he smiled as handlers and security rushed him through the airport to a waiting vehicle.

And he shared that Australia held a special place in his heart as it’s where he first met Zara.

Details of Mike’s deal remain a closely-guarded secret, but a source told The Sun: “It’s a massive coup. Mike has had a box seat for some of the most important moments in royal history for generations.

“He is sure to be discreet, but his sheer presence means this series will be an absolute must-watch.” 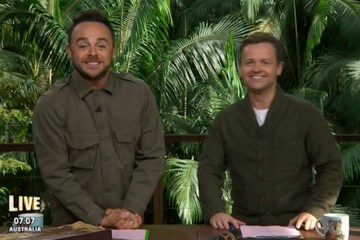 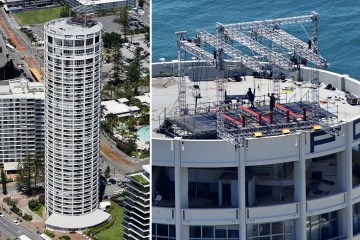 Mike joins the stars who have already arrived on the Gold Coast ready to meet Ant and Dec in the jungle camp, including radio DJ Chris Moyles and Love Island’s Olivia Attwood.

Mike was a member of the English rugby team when they won the World Cup in 2003 and won 75 international caps and scored 14 tries during his staggering 17 year career.

He married Zara in 2011 at Canongate Kirk on Edinburgh’s Royal Mile and the couple now live at Gatcombe Park in Gloucestershire with their children Mia, eight, Lena, four, one-year-old Lucas.

Mike retired from rugby in 2014 and was awarded an MBE in 2007 for his services to sport.

At royal events he wears his MBE medal alongside two others – one given to him to mark the Platinum Jubilee and another that commemorated the Diamond Jubilee celebrations.

Most read in I’m A Celebrity

Today pictures revealed show crew members assembling the famous Walk the Plank trial on top of a high rise on the Gold Coast.

It appears there will be a twist this year as the photos show three platforms instead of two.

The new stars competing to become king or queen of the jungle will be forced to face their fears when the show returns on 6 November by walking to the end of the platforms suspended 32-storeys in the air.

We previously told how the stars have been given mental health MOTs to make sure they don’t crack under the pressure cooker atmosphere of the show.

This included divulging any previous mental health issues and admitting to any booze and drugs problems.

They were checked to see if they could withstand the stress of being sleep-deprived, the pressure of the team trials and being apart from their loved ones.

Celebs were asked about their fears, phobias and anxieties and what triggers problems or episodes.

They were also asked to talk about any mental health problems, plus any addictions and details of medication they are taking or have taken.

An ITV source revealed: “The screening takes place before contracts are signed.

“The processes evaluate someone’s ability to cope in the show. It doesn’t matter that someone is famous – they are still human and with the same frailties as the rest of the population.”

The finale of super popular reality TV series I’m A Celebrity…Get Me Out Of Here!...

Allison Holker and Stephen Boss Celebrate Thanksgiving with Their Kids

Allison Holker and Stephen Boss Celebrate Thanksgiving with Their...

A destination that’s a celebrity in its own right