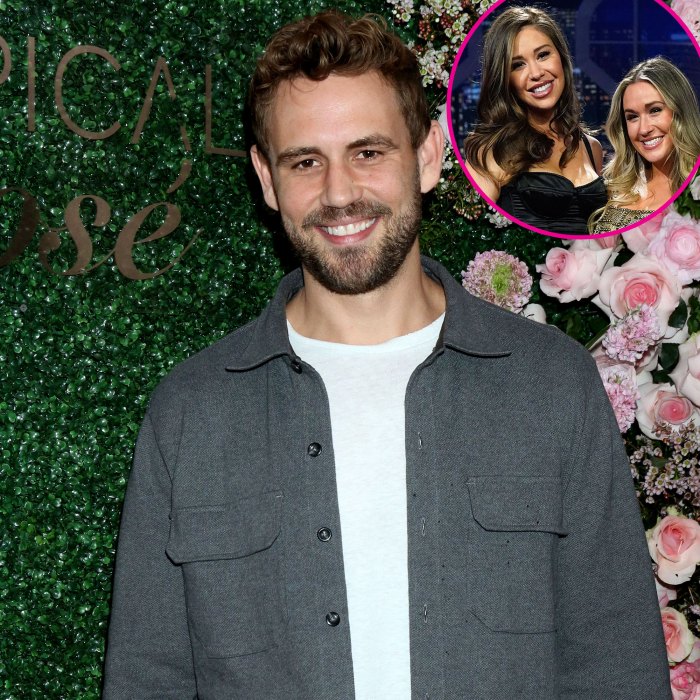 Hoping for the best. Nick Viall is looking forward to Gabby Windey and Rachel Recchia‘s joint Bachelorette season — as long as the show doesn’t affect their friendship.

“[I] can’t wait to see two Bachelorettes. Don’t know how that’s going to go, but I’m sure it will be wild,” the “Viall Files” podcast host, 41, told Us Weekly exclusively at the Elton John 2022 Oscars Viewing Party in Los Angeles on Sunday, March 27.

Nick also added that he hopes the show’s producers “know better” than to make the two leading ladies compete with one another during their season because he enjoyed seeing Gabby, 31, and Rachel, 26, develop a close bond during Clayton Echard‘s season of The Bachelor. “I don’t think it’s going to be a good look for anyone to pit them against each other,” the longtime Bachelor Nation member continued. “I hope and expect to see a lot of camaraderie and … a sisterhood between the two [women]. I’m sure there’ll be drama and there will be ways to kind of elicit that, but I’m optimistic that it won’t be in any way Gabby versus Rachel. That’s my hope.”

Host Jesse Palmer announced that both the ICU nurse and the pilot had been chosen as the Season 19 Bachelorettes during the live After the Final Rose special earlier this month. This is the first time in Bachelor Nation history that two leads will appear for the entirety of a season.

While they were shocked by the announcement, both women explained during the finale that they felt lucky to be able to have each other’s backs as they embark on their new journey. “It’s crazy. This is insane and I’m excited to do this journey with you,” Rachel told her fellow Bachelorette on March 15. “We did it once together and we’ve been through the [craziest] experience together.”

Gabby agreed, adding: “I’m a girl’s girl through and through, so having a friend by my side is the best thing I could ask for.”

With so many questions about how the upcoming Bachelorette season will be handled, the pair are relying on one another to stay steady and positive as they begin filming. “Everyone keeps asking [how it will work],” Gabby said during an interview on Good Morning America earlier this month. “We just got thrown in.”

She continued: “But I have faith and a lot of trust, and I love Rachel to death and I know we’re gonna have each other’s backs the whole way, so there’s really not a doubt in my mind that it’s gonna end up [going] well.”

“It’s actually insane the things me and Gabby have been through [on the show],” Rachel added. “We always knew that we had a bond forever and to get to do this together, now [she’s] never going to be able to get rid of me!”

Palmer, 43, confirmed that the twosome had begun filming on March 27, sharing a behind-the-scenes look at the season on social media. “Alright, it’s about 7 a.m. [and] the longest night in television is officially over,” the former football player explained via his Instagram Story. “Night 1 is in the books for Rachel and Gabby. Their journeys are officially underway! Can’t wait for you to see it.”

Season 19 of The Bachelorette premieres on ABC Monday, July 11.