Seahawks Quarterback Russell Wilson Is Being Traded to Denver Broncos 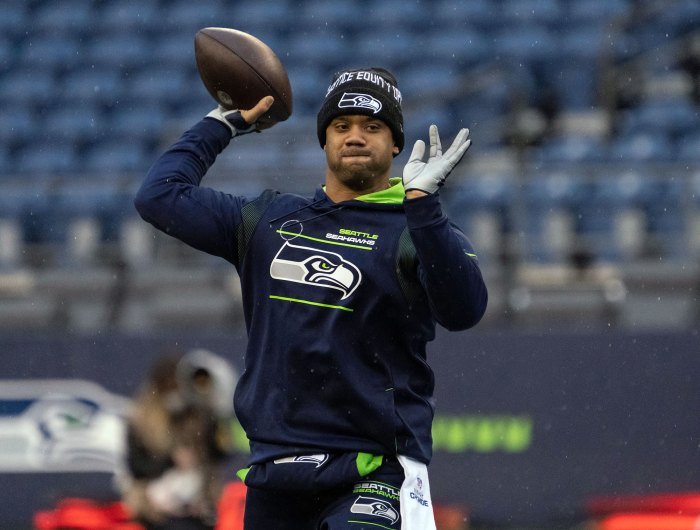 Switching things up! Russell Wilson will not be returning as the Seattle Seahawks quarterback for the 2022-2023 football season.

News broke on Tuesday, March 8 that the 33-year-old athlete will be traded to the Denver Broncos after playing for the Seahawks for 12 years.

Wilson’s relocation came as a surprise to many as he has a no-trade clause in his contract. According to NFL Network, the Ohio native will waive the clause to go to Denver.

The Broncos have agreed to trade their current quarterback Drew Lock as well as tight end Noah Fant and defensive lineman Shelby Harris as part of the deal, ESPN reported on Tuesday.

The franchise will reportedly give up two first-round draft picks, two second-round picks, a fourth-round pick and a fifth-round pick to the Seahawks to secure Wilson.

The negotiations, however, are still ongoing as the nine-time Pro Bowl quarterback cannot finalize any agreement until the new league year begins on Wednesday, March 16.

Wilson, who was drafted by the Seahawks in 2012, previously spoke about his desire to remain in Washington after his team finished with a disappointing 7-10 record at the end of the 2021-2022 season.

“We’ve always thought I would be here,” the former University of Wisconsin player said during a press conference late in the year. “That’s been always my goal, to win multiple Super Bowls, and my plan is to be here and do that. You take every day and you just enjoy the moment.”

The professional athlete — who shares two children with wife Ciara — may not have originally planned to play for another team during his career, but he has been vocal about sticking with the sport well into his 40s.

“I think that when you’re trying to play as long as I’m trying to play — I’m trying to play to 45, 12 more years,” Wilson said on the March 1 episode of Jimmy Kimmel Live!, confirming that he spends roughly $1 million per year to stay in shape. “For me, the mentality, the focus level, everything that you have to do has to be surrounded on that.”

The Super Bowl champion noted that it’s been an “amazing journey” for him thus far as a football player.

Wilson’s decision to go to Denver comes shortly after Green Bay Packers quarterback Aaron Rodgers confirmed on Tuesday that he would not be retiring despite speculation to the contrary.

“Hey everyone, just wanted to clear some things up,” the 38-year-old athlete tweeted. “YES I will be playing with the @packers next year, however, reports about me signing a contract are inaccurate, as are the supposed terms of the contract I ‘signed’. I’m very excited to be back 💪🏼 #year18❤️.”

Both Rodgers and Wilson are two of the most senior quarterbacks in the NFL after Tom Brady — who played for the New England Patriots for 20 years before leading the Tampa Bay Buccaneers for two seasons — and Pittsburgh Steelers’ Ben Roethlisberger announced their retirement following last season.