Sofía Reyes takes us into a utopian, otherworldly paradise in her new video for “Luna.” On Thursday, the Mexican singer premiered her song’s visuals with Rolling Stone, and teased the start of a new album era following her excellent, cumbia-filled album Mal De Amores.

The video, directed by Mamo Vernet, follows Reyes sitting nude in a field of moss as she sings about the beauty of finding new love. As the song’s beat picks up, she’s surrounded by dancers as she asks à la Frank Sinatra, “Why can’t we go to the moon?”

“What this person makes me feel is love in a very tantric type of way,” she tells Rolling Stone. “I’ve been reading a lot about that and divine energy. I think [‘Luna’] is a very beautiful song. It’s definitely something very refreshing, very different from what I’ve done before, which is always risky or scary.”

The lyrics have a touch of sexiness as she reaches the second verse and transitions into a seductive red backdrop in the video. “I want you to bite my mouth, put me against a wall, because that drives me crazy,” she sings. For Reyes, it’s about capturing that “fire inside that I’m embracing,” she says.

By the end of the video, Reyes levitates — symbolism for “following the light within you,” she explains — as she gets closer to the moon. 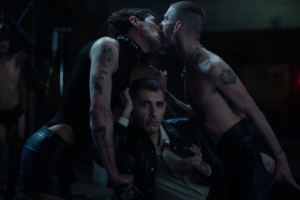 “Luna” follows several collaborations with the likes of Train, Los Ángeles Azules, and Carlos Zaur. It’s also her first solo release since dropping her sophomore LP Mal De Amores over the summer. For Reyes, the new music is “the second part” or “B side” of her excellent album, which featured the record-shattering “1, 2, 3” with Jason Derulo.

“I definitely thought I was gonna do way more cumbias and way more reggaetón. But I went with the flow in the studio. We started tripping with ideas and sounds and it just took us to a different place,” she says of her upcoming project. “I’ve been playing a lot with sound bowl sounds and instruments that I’ve been finding in different countries of Latin America. I love it. I feel like this is the type of music I’ve been wanting to explore for a bit.”

And the lyrics for the new music will capture Reyes’ post-heartbreak energy today. “I’m speaking from a different place in life. And I think that’s super beautiful,” she says. “This new album represents what comes after a heartbreak on Mal de Amores. Sometimes you have to go through those places to bloom again.”