By newadmin / Published on Thursday, 10 Nov 2022 02:20 AM / Comments Off on Trump Spreads Rumors, Threatens Allies in All-Out Attack on DeSantis – Rolling Stone / 40 views


The Republican Party’s midterm flop has accelerated the power struggle between Donald Trump and Ron DeSantis, and if Trump’s latest moves are any indication, the 2024 GOP primary is about to get real ugly real fast.

Republicans rolled in Florida on Tuesday night, with DeSantis rolling to reelection as governor and Sen. Marco Rubio doing the same. Things weren’t so rosy in MAGAland, where a string of Trump-backed candidates lost big. The contrast was enough for the New York Post to put the Florida governor on their cover and labeling him “DeFuture.”

The cover enraged Trump when he saw it on Wednesday, according to a source familiar with the matter and another person briefed on it. For decades, Trump has been an avid fan (and sometimes whiny critic) of the Murdoch-owned, right-wing tabloid. But on Wednesday, the former president trashed the paper as “garbage,” the person familiar with the situation relays, and complained about the Post and other Murdoch properties’ insufficient subservience to Trump. (A spokesman for Trump did not respond to a request for comment.)

Trump has been asking his advisors to keep tabs on high profile Republicans’ 2024 posturing, monitoring for signs that they’re moving away from the former president and toward DeSantis or other potential rivals, the first source tells Rolling Stone. And Trump has for months regularly insulted  DeSantis behind his back, accusing him of being, among other things, a MAGA rip-off artist who constantly steals from Trump and the ex-president’s family. 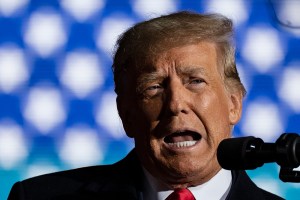 As he prepares to announce his own 2024 run, Trump has been soliciting dirt on DeSantis and other potential primary rivals, including Virginia Gov. Glenn Youngkin. Trump has also spread gossip about DeSantis, including unverified allegations about his private life. Rolling Stone is declining to repeat what Trump has said.

This type of gossip accumulation and dissemination is a common habit of Trump’s, one that he took to the White House, even when dealing with foreign leaders and highly sensitive U.S. intelligence. He’s using it against DeSantis while also stepping up his public attacks.

Since last year, both men had sought, for mutual political benefit, to keep their feud mostly veiled from public view, but in recent days Trump has grown more publicly antagonistic. Before the election results came in on Tuesday, Trump threatened to release information about the governor. “I will tell you things about him that won’t be very flattering,” Trump told The Wall Street Journal on his private jet after departing a rally in Dayton, Ohio, on Monday. “I know more about him than anybody other than perhaps his wife, who is really running his campaign.”

One of Trump’s lawyers went after DeSantis during a recent rally, saying that the governor owes his success to Trump. “DeSantis is DeSantis because of Trump,” said Trump attorney Alina Habba at a Monday rally in Ohio, the Daily Beast reported. “He needs to stay in Florida,” she added.

The results seem to have struck a nerve for Trump, judging by his Wednesday posts on his app, Truth Social. Trump on Wednesday wrote: “Now that the Election in Florida is over, and everything went quite well, shouldn’t it be said that in 2020, I got 1.1 Million more votes in Florida than Ron D got this year, 5.7 million to 4.6 Million? Just Asking?”

Trump ran in a general election, when turnout is consistently far higher than in midterms. And regarding the results of those midterms, Trump defended his record, despite losses from high-profile candidates. “While in certain ways yesterday’s election was somewhat disappointing, from my personal standpoint it was a very big victory – 219 WINS and 15 Losses in the General – Who has ever done better than that?” he wrote.