Tucker Carlson has a type. He likes hardline nationalists who can cosplay anti-elitism while pretending they didn’t go to an Ivy, or have an heiress mother, or have the richest people in the country funding their campaign. He likes the kind of candidate who blends hateful nativism and a fear of the impending collapse of Western Civilization™, with mockery of blue-haired, cat-owning coastal liberals.

Turns out Tucker’s type may not be super electable.

As Republicans scramble to find an explanation for their poor midterm showing, finger pointing abounds. “Heads should roll,” declared commentator Ben Shapiro. Trump, Kevin McCarthy, Mitch McConnell, the entire leadership of the party is under fire. So what about Tucker?

Carlson enjoys a position as a kingmaker and agenda setter for GOP politics. Look no further than how he almost single-handedly converted the “great replacement” conspiracy theory from a white nationalist talking point to a major policy concern for conservatives. If there’s a man besides Donald Trump with the power to catapult local political hopefuls into national political figures — and who wielded that power with unbridled enthusiasm in the lead-up to the election —  is it not the man with the most watched cable news show in the country? 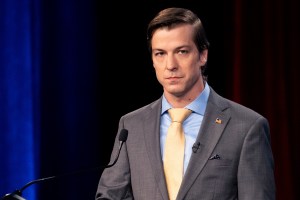 The candidates Carlson championed as the anti-establishment, America first, blood-and-soil future of conservative politics floundered in virtually every race where they weren’t an incumbent. Ohio Senator-elect JD Vance seems to be – at this moment – the only exception. Blake Masters lost to Mark Kelly in Arizona, where gubernatorial candidate Kari Lake is already resorting to claims of election rigging to explain her deficit to Democrat Katie Hobbs. In Washington state, the extremist affiliated House candidate Joe Kent is on the verge of an unexpected defeat at the hands of Democrat Marie Gluesenkamp Perez.

Vance, Kent, and Masters, were among Carlson’s most frequent guests on his flagship Fox News program Tucker Carlson Tonight. According to weekday cable segment data from watchdog group Media Matters, Vance, Kent, and Masters appeared on Carlson’s show 17, 14, and 10 times respectively in the year before the election (11/1/21-11/10/22). Vance and Kent were among the 20 most frequent guests on the show in that time period. Carlson also produced hour-long, in-depth interviews with each of them for Fox’s subscription-based streaming service, Fox Nation.

The three candidates were some of the clearest examples of how Carlson and his political allies hoped to gain national, legislative footholds that would help them reshape federal policies in their own image. All three of them ran their campaigns by spitting up the latest culture war panic ginned up by the Stephen Millers and Chris Rufo’s of the world. And the faustian bargain was evident to everyone watching.

In one appearance, Vance, whose campaign was supercharged and largely funded by conservative Silicon Valley billionaire Peter Thiel, declared Silicon Valley tech companies “enemies of western civilization.” Vance and Masters both went all in on pushing the racist great replacement conspiracy theory, accusing Democrats of wanting to “import” new voters via the southern border in order to win elections. Now there’s not a lot of border crossings in Ohio, but in Masters’ case, an over 100,000 vote deficit suggests that making such claims in a state with a large hispanic population harmed rather than helped.

A frequent guest on Alex Jones’ InfoWars network, Kent has been dogged by ties to extremism throughout his campaign. The Trump endorsed candidate appeared as a speaker at a rally on behalf of defendants accused of storming the Capitol on Jan. 6th. Kent has appeared repeatedly on Carlson’s show to attack the January 6th investigation, as well bolster Carlson’s claims that the 2020 election was suspect and the attack on congress was orchestrated by government operatives.

In one September monologue Carlson spoke directly to midterm candidates, whom he knows to be viewers of his show, elevating Kent as the example of a candidate who was hitting the messaging right and warning them against modeling themselves after party line candidates like Lindsey Graham. “If you do emulate Lindsey Graham and steal those talking points, you will lose,” he declared.

In that same monologue Carlson acknowledged that there was evidence the GOP was “alienating its own voters,” and encouraging the party to “talk about the issues that people actually care about in this country, issues that are relevant to their lives.”

But as it turns out, aligning with Carlson’s nightly demonization of undocumented immigrantion as the “greatest crime ever committed against the United States,” attacks against transgender and LGBTQ people that result in bomb threats to childrens’ hospitals, banning books you don’t like, and maligning anything and anyone that acknowledges racism as an attack on civilization (unless it’s against white people), may not actually be endearing to voters who arent soaked in the lore of Fox News’ universe.

Nowhere is the divide clearer than among young voters, who early reports indicate had the second highest level of turnout in the past three decades, and who heavily favored democrats. As of yesterday, we saw a 27 percent turnout of youth voters 18-29, with a 28-point margin favoring Democrats.

A lot of the culture rhetoric coming from the right is a signal that they “do not trust young people,” says Jack Lobel, deputy communications director of the progressive gen-Z group Voters of Tomorrow, tells Rolling Stone. Lobel explains that the conservative focus on policing inclusivity, and demonizing honest and open discussions about race and sexual identity is offputting to slews Americans reaching voting age, who feel infantilized. “Gen Z turned out, again, to deliver a blow to the far-right for the third consecutive cycle in a row…because we know stuff, and we know that they are not fighting for our futures,” he said.

During his monologue Wednesday night, Carlson argued that “the people whose job it was to win but did not win should go do something else now. “We’re speaking specifically of the Republican leadership of the House and the Senate and of the RNC.” As if Fox does not operate as an integral public relations arm of the Republican Party, as if Carlson and his programming is not a core informant of the GOP’s messaging and policy priorities.

Carlson won’t be losing his job anytime soon, nor taking any lessons from his wipeout, but Tuesday’s midterms are a sign that many voters are not sold on having his acolytes run their country.