Will Smith was asked to leave Sunday’s Oscars after hitting Chris Rock but refused, the Academy of Motion Pictures Arts and Sciences has said.

It comes as many questioned why the former Fresh Prince was allowed to remain seated in the front row after the incident.

“Things unfolded in a way we could not have anticipated,” the academy said in a statement.

A slap, a silence and a Stallion: Seven stand out moments from this year’s Oscars

“While we would like to clarify that Mr Smith was asked to leave the ceremony and refused, we also recognise we could have handled the situation differently.”

The Academy’s board of governors confirmed they have begun “disciplinary proceedings” against the actor for violating the group’s standards of conduct.

Smith has the opportunity to defend himself in a written response before the board meets on 18 April.

Actions against Smith could include suspension, expulsion, or other sanctions.

It comes after the film academy earlier condemned Smith’s onstage assault of Rock, and said it was launching a formal review, Wednesday’s statement contained stronger language.

“Mr Smith’s actions at the 94th Oscars were a deeply shocking, traumatic event to witness in-person and on television,” the academy said. 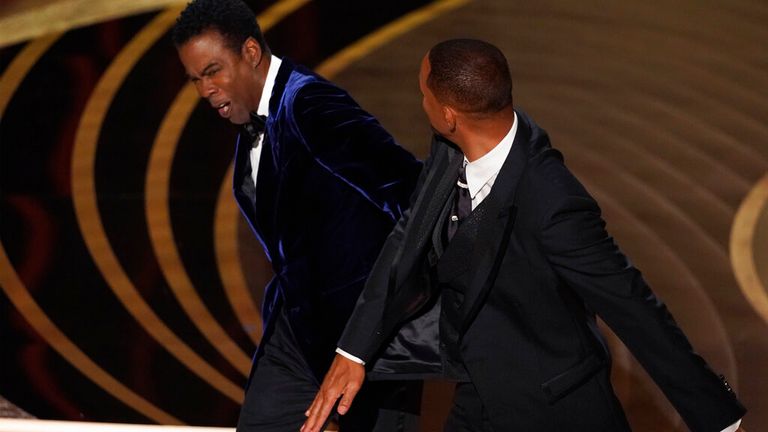 Reaction to Will Smith’s attack

“Mr. Rock, we apologize to you for what you experienced on our stage and thank you for your resilience in that moment. We also apologize to our nominees, guests, and viewers for what transpired during what should have been a celebratory event.”

Smith apologised to Rock the next day

Smith walked onto the stage and slapped Rock after he made a joke about his wife, Jada Pinkett Smith. Referring to her shaved head, Rock said: “Jada, can’t wait for GI Jane 2.”

While Smith initially laughed at the jibe, his wife appeared unimpressed – she revealed in 2018 she was diagnosed with alopecia and has spoken publicly about the challenges of hair loss.

Was Chris Rock wearing a cheek pad at the Oscars when Will Smith slapped him?

Smith went on to win an Oscar ten minutes after the incident, using his speech to apologise to the Academy for his actions.

However, he only apologised to Rock the following day, writing on Instagram: “I was out of line and I was wrong.”

Rock has not yet responded but he is appearing publicly today for the first time since the ceremony in Boston for his sold-out comedy show.

A number of celebrities have weighed in on the slap, with actor Jim Carrey saying he was “sickened” by what he saw and that Smith “should have been arrested”.

Meanwhile, OJ Simpson, the controversial NFL star who was acquitted in 1995 for the murder of his ex-wife and her friend, said Smith was “wrong” but he “understood the sentiment”, having been the subject of comedic routines in the past.

‘Ugliest Oscar moment ever’: Celebrities react to Will Smith slap

The US ticket seller said sales increased by more than 25 times in the 48 hours since the incident.

A comedy gig inside a cave in the Peak District had to be called off after a fan became...